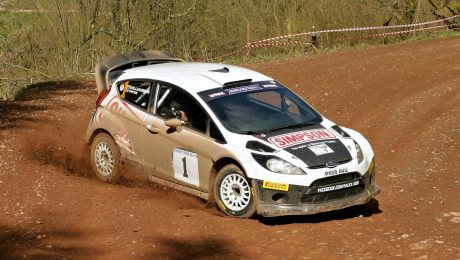 Sponsored once again by established race wear and accessory firm Rallynuts Motorsport, the Midland Manor Motor Club organised event enters its 44th year and around 90 cars will contest the rally.

Based at the Royal Welsh Showground, the event takes place in the Gwibedog, Cefn, Crychan and Radnor forests with 44 miles of special stages lying in wait. With world class stages on offer, the event has attracted the attentions of competitors from across UK and Ireland.   Connor McCloskey brings his stunning Ford Fiesta WRC across the Irish Sea with John Rowan alongside.

The 2013 Severn Valley Stages winner heads to the event in a bid to gain more experience of the Welsh forests and to improve on his 14th spot in the Welsh Championship. He will be one to watch for his second outright victory at the weekend.

BTRDA regular Charles Payne will pilot his new Ford Fiesta WRC, co-driven by Carl Williamson.  Payne has a proven record in the Welsh forests, taking a podium spot on the event in 2010 and will undoubtedly be embroiled in a battle for the win with McCloskey.

Dylan Davies and Llion Williams will aim to improve on their current Welsh Championship position in their Subaru Impreza.  After winning the Red Kite Stages earlier this year, another win has eluded the Welsh pairing and will be hoping to reverse that at the weekend.

Fellow Subaru Impreza crew Andy Davies and Max Freeman have showed a fine run of form recently, taking their showroom Group N specification version to second in the Welsh Championship. They will be looking to close in on the gap to first.

Also in action this weekend will be event sponsor Rallynuts co-director Craig Cameron in a Subaru Impreza. Co-driven by Chris Rice, Cameron can often be found in the passenger seat for fellow director Paul Bonas but will be behind the wheel this time around.

The eagerly anticipated Mintex MSA British Historic Rally Championship returns to the event once again and provides rally fans with plenty of action on the stages. Leading the field away are Nick Elliott and Dave Price in their Ford Escort Mk2.  Taking three wins from three so far this season, they will aim to make it four in a row as the series turns to asphalt after the Severn Valley Stages, a surface Elliott has perhaps less of an affinity with.

Local hero Jason Pritchard is Elliott’s closest rival and literally crosses the road from the family car dealership to the Royal Welsh Showground rally base. With Phil Clarke in the co-driver’s seat, Pritchard will use his Ford Escort MK2 in the forest closest to his Builth Wells home and hopes to take his first win of the season.

Rudi Lancaster has returned to the sport in recent years after a several decades away, but now is on the edge of his first historic category win in his Escort Mk2. Guy Weaver co-drives for the Devon man and the duo are third crew away.

Spectators will be given plenty of opportunities to catch the action both on and off the stages. Competitors will be flagged away by the Mayor of Builth Wells Town Council at 8.30am on Saturday from the Royal Welsh Showground before heading out to tackle seven challenging stages.  Crews will return for service at 10.50am and 1.00pm with the finish celebrations taking place at around 4pm.

Crychan kicks off the spectator stages with its first run at around 9.30am. The forest can be accessed just north east of Cynghordy and with a second pass at 3.00pm, is a popular spot for rally fans.

Radnor offers another chance to watch the cars in action, with one pass of the stage at around 12.15pm. The stage can be accessed off the A488 near Monaughty. 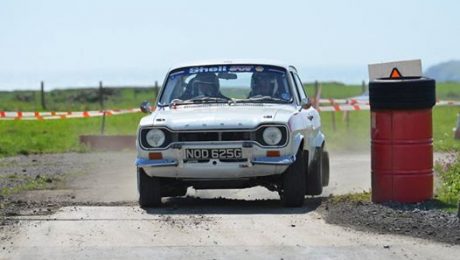 The 2017 Rallynuts Severn Valley Stages will mark a special occasion for Pembroke resident John Williams, as he returns to the event for the first time in exactly 30 years. After contesting the Welsh Rally Championship back in the 80’s, John retired from active competition due to family commitments and of course costs.

Three decades later, John has decided to return to the event which marked his last outing way back in 1987.

“I started rallying in 1984 at the age of 18 and contested various events until I really went for it on the 1987 Welsh Forestry Championship in my home built MK2 RS2000” he says. “I scored a few good results with a best placing of 3rd overall on a snowy Mid Wales stages and was co driven by Andy Morgan who later went on to co drive for ‘Mad’ Mick Jones.”

John in action on the 1987 Severn Valley Stages

“I was I think lying about 2nd in the championship to Jon Ballinger but by the end of the Severn Valley stages I had big problems with my engine and could not afford to repair it. I just basically run out of money and could see no way of funding it as I was at home on a farm with my father and money was tight so I just sold the car. I loved the sport but could not afford it so just tried to forget about it and would not attend events because of that. I took up other sports in the meantime that were a lot cheaper.”

“In 2014 my new son in law bought a rally car and I went along to help service and I am afraid that was it, the bug came back and within a year I had bought myself a MK1 Escort because I  now prefer the look and the history of the Mk1 Escort. I did 4 SV rallies last year to get the feel back but my heart lies in the forests so I am really looking forward to this years SV stages. I think it was my very first forest rally in 1985 as well . My intention is just to get round and relearn all the techniques on how to drive on loose surfaces, you just cannot practice any other way unfortunately but to just do it.”

Organisers of the event wish John the very best of luck.