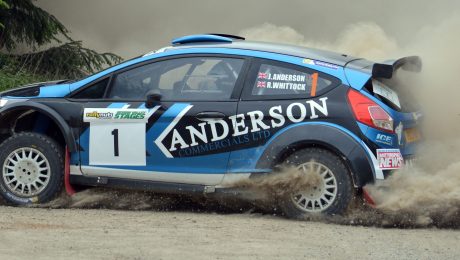 MSA British Rally Championship (BRC) contenders Jamie Anderson and Ross Whittock took a dominant victory at the Rallynuts Motorsport Severn Valley Stages on Saturday (4th June) in their Ford Fiesta R5. Anderson headed to the event as a shakedown to the forthcoming British Championship round which utilises similar forests and his efforts were rewarded with a 14 second victory from nearest rivals Luke Francis and John Roberts in their Mitsubishi E9. Fellow BRC challengers Ollie Mellors and Ian Windress also had the same idea and were also pleased to have taken third overall in their Proton Satria Neo S2000.

With a revised route and a host of top-line championships joining the Midland Manor Motor Club organised event, competitors were treated to 45 stage miles of classic Welsh forests across Powys including a return to the Radnor forest complex after a break of six years, attracting a substantial 120 car entry in the process.  Dust would be the talking point of the day as the dry conditions and lack of a breeze meant it was lingering in the trees and creating an issue for much of the field.

Anderson, from Leicestershire took first blood on the opening five mile Gwibedog test with a six second gap from Pirelli MSA Welsh Rally Championship front runner Francis.  That lead would never be challenged as Anderson put in a string of fastest stage times to dominate the event and take his first rally win since the Woodpecker in October 2015. Francis would be his closest challenger all day long and despite clawing four seconds back on the fifth stage, could not overhaul the on-form Anderson.  Francis from Rhuddlan had complained about the dust issue from the first loop which would scupper any chargeback he may have had on the rally leader. A solid second and maximum Welsh Championship points were his reward.

Ollie Mellors had a trouble free run to third despite suffering from a lack of power on the long straights of Radnor forest.  Dylan Davies and Mark Glennerster recovered from a slow start, languishing down at eighth overall on the opening loop to take a well-deserved fourth in their Subaru Impreza and a solid Welsh Championship points haul. Sacha Kakad and James Aldridge also had an impressive comeback from 17th to end the day fifth overall in their Mitsubishi E10.

“It’s been a really perfect day to be honest” commented Anderson at the finish.  “We have had no dramas all day long and to have come away with a rally win was a bonus.  The stages are fantastic and it’s certainly been different running at first car on the road, I’ve never had that honour before and sweeping the stages is hard work. But we have done what we set out to do and gaining some experience ahead of Julys Nicky Grist was important.”

The battle for Mintex MSA British Historic Championship honors was nowhere near as straight forward as the top three however and there was a shock leader after stage one.  Adam Milner and Roy Jarvis stormed to third overall in the event and Historic leader in their Category 2 Ford Escort Mk1, taking many by surprise.

But Milner gradually slipped down the leaderboard before retiring on the penultimate stage of the event. Taking over from top spot on stage two were Joe Price and Chris Brooks who settled in nicely to the head of the pack, picking up nicely where they left off from last month’s Pirelli Rally. Nick Elliott and Dave Price battled long and hard with Paul Barrett and Dai Roberts for second throughout the day after challengers and local stars Jason Pritchard and Phil Clarke rolled out of the event on stage four.

It was far from a done deal for Price, as his Escort MK2 became stuck in gear on the penultimate test to hand the lead to Elliott in his similar machine. That lasted for just one stage however as on the final run Elliott picked up a puncture, dropping behind a chasing Barrett to second. Barrett’s newly inherited win further extends his lead in the series with Rudi Lancaster and George Gwynn taking a well-deserved third.

There was another Ford Escort one, two, three in the HRCR Stage Masters Rally Challenge with Ben Friend and Cliffy Simmons heading the runners after Shaun Rayner and Guy Weaver had an “up and down” day to take second. Stanley Orr and Declan Dear claimed the final podium spot despite a series of punctures throughout the event.

Despite the challenging and unusually dry conditions, 86 of the 120 starters finished the event which took crews through seven forestry stages. Clerk of the Course Chris Ashley believes this has been one of the best Severn Valley Stages for many years. “The organising team has had to overcome several issues before the event but thanks to the help and support of so many people, we believe we have delivered a first class event in 2016” he says.  “Huge thanks must go to our title sponsor Rallynuts Motorsport who has supported the event for the first time this year. We do hope this is just the start of a long and prosperous relationship”.