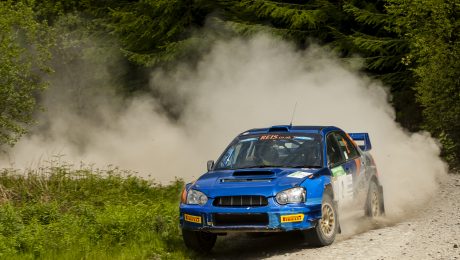 Biggest entry for several years as crews line up to tackle classic Welsh Stages
Over 120 crews will head away from the Royal Welsh Showground in Builth Wells on Saturday 4th June as they tackle this year’s Rallynuts Motorsport Severn Valley Stages.  With a revised route and a host of top-line championships joining the Midland Manor Motor Club organised event, competitors from across the UK will tackle 45 stage miles of classic Welsh forests across Powys this weekend.

The popular event is a round of the Mintex MSA British Historic Rally Championship, Pirelli MSA Welsh Rally Championship, the new HRCR Stage Masters Challenge and a reserve round of the FMP Rally Challenge which will all provide a close fought battle on the stages throughout the day. With stages such as Cefn, Crychan and Gwibedog joining the re-introduced Radnor test, organisers have devised a fresh new route across stages which have been chosen specifically for their prime condition.

Sporting the coveted Number 1 on the doors will be MSA British Rally Championship contenders Jamie Anderson from Leicestershire and Ross Whittock in their Ford Fiesta R5 who are keen to sample the stages ahead of the BRC round in July. Hot on their heels will be Welsh Rally Championship leaders Luke Francis from Rhuddlan and John Roberts in their Mitsubishi E9 at number two seed.  Third car on the road falls to Llanon’s Dylan Davies and co-driver Mark Glennerster who bring their familiar Subaru Impreza to the event.

Another British Championship regular Ollie Mellors starts at five in his Proton Satria Neo S2000 with Ian Windress alongside. Tristan Bailey and Jamie Edwards are at six in the popular Mitsubishi WRC 04 but have Northern Irishman Enda McCnulty just behind in seventh, who makes the trip across the Irish Sea in his Subaru Impreza co-driven by Ronan O’Kane. Martyn and Dawn England head a duo of Fiesta R5’s in eighth with Tomas and Eurig Davies joining the BRC regulars in ninth.

British Historic Rally Championship frontrunner Jason Pritchard can claim to be the closest local competitor with the family car dealership a stone’s throw from the Builth Wells Rally HQ. With Phil Clarke alongside, Pritchard will use his Ford Escort RS1800 in a bid to better his second place on last year’s Severn Valley Stages at car 10 and leads the pack of BHRC contenders. Having suffered a sizeable ‘off’ at last month’s Pirelli Carlisle Rally, Nick Elliot and Dave Price start at 11 in their Ford Escort after a hasty rebuild in between events. Winners of that event Joe Price and Chris Brooks are away at 12 in their similar machine.  Championship leader Paul Barrett is accompanied by Dai Roberts at car 14 in their Ford Escort.

Andy Davies and Max Freeman head the FMP Rally Challenge crews at 17 with likeable Welsh lady driver Sara Williams and co-driver Patrick Walsh just behind at 25, both in Subaru Impreza’s. In the HRCR Stage Masters Challenge, Stanley Orr and Guy Weaver are out front in their Ford Escort RS2000 at 21 but you’ll need to look someway down the field at 95 to find the next crew of Rikki Proffitt and Graham Wild in their stunning Datsun 240Z.

Spectators are also well catered for this year with several top-class viewing locations along the route to watch the action from.  The Royal Welsh Showground in Builth Wells plays host to the rally and provides an unrivalled venue for Rally HQ, Scrutineering and Documentation during the afternoon of Friday 3rd June.

Crews will be flagged away from the Showground at 8.30am on Saturday 4th by the Lord Mayor of Builth Wells, Councilor Meryl Prynne alongside commentary and interviews before heading towards the first spectator stage at Crychan at 09.30am. The Radnor stage kicks off at around 12.00pm which is then followed by the second run through Crychan at around 2.30pm with the lucky crews returning to the finish at the Showground just after 3.30pm. A table full of glittering glassware awaits the winners at the Awards Ceremony at 6.30pm in Rally HQ. 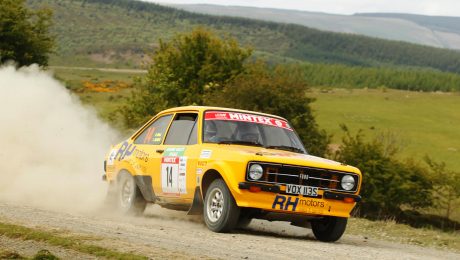 Over 100 entries have already been received for this year’s Rallynuts Motorsport Severn Valley Stages and with only days left until entries close for the 4th June event, organisers are predicting one of the largest entries the event has seen for many years. Crews from some of the best rally championships in the UK will head to the Builth Wells based event to tackle 45 miles over seven “prime condition” stages which have been confirmed after the final route survey this week.

As a round of the Mintex MSA British Historic Rally Championship, Pirelli MSA Welsh Rally Championship, HRCR Stage Masters Challenge and FMP Rally Challenge, the Rallynuts Motorsport Severn Valley Stages will see a wide and varied depth of entries to this year’s event. Thanks to the efforts of the Motor Sports Association and Natural Resources Wales, an extension to the 2015 forestry fees (for this event only) enabled the event to go ahead as planned.

Regular championship contenders will be joined by MSA British Rally Championship hopefuls who are all eager to sample the fresh new route in 2016 which includes the popular Radnor test after a break of six years. In a bid to provide a value for money rally, the Midland Manor Motor Club organising committee has achieved a route which has 64% of single stage usage (36% of repeat usage) with an entry fee of just £525 and only utilises stages which have been chosen for their prime condition.

Joint Clerk of the Course Chris Ashley is pleased with the format and conditions for this year’s event. ”I believe we have provided a great route this year and the road conditions are looking tip-top” says Ashley.” he said. “The team has worked hard this year to provide a strong route that will suit everyone and we have ensured that only the hardest of forest tracks have been selected to ensure the entire field has good quality stages to compete on during the day. We indebted to Paul and Craig from Rallynuts Motorsport Ltd for the support they are providing this year”.

The Royal Welsh Showground in Builth Wells plays host to the rally and provides an unrivalled venue for Rally HQ, Scrutineering, Attended Overnight Parking, Start/Finish, Service Area and Awards Ceremony. Competitors will be flagged away from the Showground at 8.30am on Saturday 4th to tackle seven classic Welsh stages, before returning to the finish just after 3.30pm.

The 2016 Rallynuts Motorsport Severn Valley Stages event regulations and online entry form are available on the event website at www.severnvalleystages.co.uk .

The closing date for entries is midday on Friday 27th May.

Those requiring Common Route Notes of types A,B and C will need to order these by Monday 23rd May.

You can also follow the event on social media:
www.facebook.com/severnvalleystages
www.twitter.com/svsstages 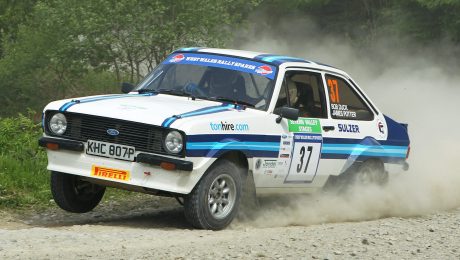 Organisers of this year’s Rallynuts Motorsport Severn Valley Stages are delighted to announce that not only will the event be going ahead as planned on the 4th June, but there will be no increase to the advertised entry fee of £525.

The popular event offers 44 competitive stage miles in classic Welsh forests such as Cefn, Crychan and Radnor, seeing an exciting new route across stages which have been chosen this year primarily for their prime condition. The organising team has also ensured the event provides maximum value for money for its competitors by providing 64% of single stage usage (36% of repeat usage) with an entry fee of just £525.

Thanks to the efforts of the Motor Sports Association (MSA), the governing body of UK motor sport was able to reach an agreement with Natural Resources Wales (NRW) late last week to secure an extension to the 2015 road usage fees. This means the Midland Manor organised event can now scrap the surcharge that potentially could have been imposed if an agreement was not reached with NRW and competitors will now be able to sample some of the best stages in the country at a realistic cost.

Joint Clerk of the Course Chris Ashley is confident the route will suit everyone in the field “We have deliberately chosen the stages this year because we know they are of an excellent surface and stand up very well to a second pass” says Ashley. “The route was also designed to avoid any roads used previously this year by other events as best we could, meaning the entire field can benefit from smooth roads. Add to this just 36% of repeat usage and we truly believe we have an excellent format for all. I would encourage everyone to enter as soon as possible to ensure they can sample classic Welsh Stages at this price”.

“It has of course been a tense time for all of the rallying community and whilst the situation after our event has not yet been resolved, this news from the MSA means we can continue to offer some of the best stages in Wales at a cost effective figure” he adds.   “We extend our sincere thanks to the MSA for all their hard work in negotiations with Natural Resources Wales and we can really press ahead with plans to host yet another fantastic event in the Welsh forests.”

Or follow the event on social media:
www.facebook.com/severnvalleystages or www.twitter.com/svsstages

The Motor Sports Association (MSA) and Natural Resources Wales (NRW) have reached a temporary agreement allowing the Severn Valley Stages to proceed as planned on 4 June, and the MSA is encouraging crews to submit their entries as soon as possible.

Rob Jones, MSA Chief Executive, said: “This is excellent news for the dedicated organising team behind the Severn Valley Stages, who have continued to work hard on their pre-event preparation despite the current uncertainty. What Midland Manor Motor Club need now is for the rallying community to turn out in force on 4 June, so we would please encourage all crews considering competing to get their entries in now. The MSA appreciates the fact that NRW has worked closely with us to achieve this accommodation for the Severn Valley Stages.”

Keith Ashley, Clerk of the Course for the Severn Valley Stages, said: “Going ahead as planned is absolutely brilliant news after the uncertainty of the last few weeks. It is also good for both the sport and the volunteers who have spent 12 months organising the rally. We’re extremely grateful to senior management at both the MSA and NRW for their positive approach and willingness to bring forward solutions to a difficult problem. Extending the previous cut-off date for the 2015 fees as a one-off measure will enable the 43rd running of the Severn Valley Stages to go ahead.”

The MSA and NRW continue to work together to negotiate a wider agreement for forest stage rallying in Wales.